In continuation of my jolly tour around Beautiful and Serene Estates in Enugu, I visited one of the classiest Estates in the Coal City, a place where humans interact with animals on daily basis, not just any animal but the wild and untamed. An Estate called “Zoo Estate”. Well, I know by now you are subconsciously full of imaginary scenarios within the Estate, especially of what interactions there could be between humans and untamed (wild) animals. Never mind, I’ll be of help to you.  Set your imaginations on the trees, the grasses, the wild animals and humans all living together in an area, humans living in their mansions, trees and grasses beautifying the surroundings and the animals restricted to their enclosures. Imagine a day a resident is ready for work, the lion found a way out of its enclosure hovering around for a hunt, the man steps out and the lion attacks; what a meal for the hungry lion! It doesn’t just end there, have you thought of children having fun at sunset, the whole atmosphere filled with happiness and laughter, suddenly a child falls into the crocodile’s enclosure, ah! What an unexpected dinner for the reptiles, but for the children, a sore bite at the end of a delicious meal. Imagine the zookeeper forgetting to lock the monkeys’ chambers, the monkeys escape and find their ways into houses stealing whatever they come across: clothes, shoes, fruits, worse of all – debit cards, drivers’ licenses and international passports. African monkeys can be so annoying when untamed. Also imagine all sort of discomforts these wild animals can be to the residents – the Lions’ roar, the Pythons’ bliss, the Horses’ neigh, the Elephants’ trumpet, the Tigers’ growl and of course the laughter of the Hyenas and the Kookaburra which can be so annoying to someone who recently had a breakup with an Ex. Yet I called it “classy”. Don’t judge me yet because those were just your “imaginations” not the reality!

Zoo Estate has an entrance beginning from the unique and famous Ogui Junction in Enugu City. The tarred and well-finished road of about 1.5 meters is guided by the high walls of the Military Cantonment, 82 Division of the Nigerian Army by the right hand side while the opposite side is guided by the walls of the New Berries Pack which is continuous with the walls of the National Museum. Lining the entrance are tall evergreen trees that provide head-cooling shelters for pedestrians. The serenity of the entrance is an introduction to the beautiful and serene atmosphere of the Zoo Estate.

The neatness of the Estate’s environment makes it hard to believe that this cool and isolated paradise is more than twelve years old. The Estate accommodates freestyle buildings with only one arguable resemblance – structural massiveness. Majority argue that the area is more of a residential quarter than an estate because of the structural diversity of the buildings. Let me also quickly tell you that Zoo Estate is occupied by the revered, the respected, the great and the mighty. 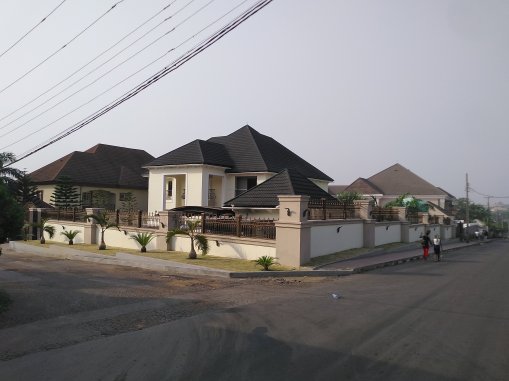 Established almost simultaneously with Golf Estate by the then Dr. Chimaroke Nnamani’s Administration as the Governor of Enugu State, the Estate was created out of a “dead” Zoological Garden which when was at its best, housed  and nurtured verities of wild animals (full story of the crumble and death of the garden, a story for another day). Poor maintenance of the garden and lack of care for the animals led to total collapse of the garden. Feeding and health care provision for the animals declined drastically, a good number of the animals died while the survivors were sick, feeble and malnourished. Incidentally, they were evacuated to destinations still unknown (if I were to guess, I would say Sobibor) while the entire landmass of the zoological garden was converted to an Estate, thus the origin of its name “Zoo Estate”.

Proximal to the 82 Division of the Nigerian Army and also having a Police Post called the Ekulu East Police Post, you need no prophet to prophesy the graveyard quietness of the Estate.

A Street in the Estate

The beauty of Zoo Estate is enhanced by green fields that line its major road tracks, a mini “love garden” sheltered by tall trees and the presence of two Hospitality and Recreational facilities – the Gates Hotel and the Lavender Spa Suites.

Although the Estate has no Urban Water Supply, almost every compound has a borehole thus residents depend less on commercial water suppliers.

Here comes the big question – how do residents interact with animals on daily basis?

In commemoration of the former occupants of the Estate, streets are named after birds and animals whose Estates were destroyed in other to establish Estates for Human. As a king wherever he comes, Lion Avenue is the largest among all the streets. Other street include: Eagle Street, Penguin Close, Fox Street, Flamingo Street, Giraffe Street, Alligator Close, Crown Bird Street, Tiger Street and Dolphin Street. Tortoise, the cunning and one of the most famous animals was either neglected or omitted. The street names make every resident of Zoo Estate, consciously or unconsciously interact with any of these wild animals on daily basis. 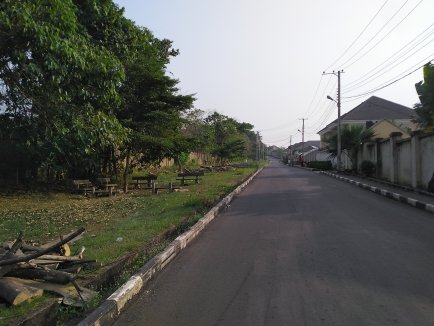 Neglected garden in the Estate

A thing of concern about Zoo Estate is the negligence of the love garden and the cutting down of trees that shelter it. Most of the concrete seats within the garden have dilapidated and none seems to be concerned about their repairs. These acts of negligence and destroying of the natural environment around the Estate has partially defaced it but a quick intervention will surely restore the original beauty of the Estate.

Wishing you all A Merry Christmas.